Cabinet saws are beasts which feature extensive power, maximum durability, large size and weight. These saws come with 3 horsepower motors or more. They consist of durable cast iron parts, a large table, a heavy-duty fence and a full cabinet in which the motor is entirely contained. These saws often weigh 400 – 600 pounds, so they weren’t made with the idea of being portable. To endure the strong force coming from the heavy motor and to decrease vibration as much as possible vibration, the excess weight of these saws is necessary.

Contractor saws were made with the idea of being somewhat portable, so that contractors can be able to utilize them on job sites. These saws come with a 1 3 – 4 horsepower motor, lighter weight design for portability, a lighter duty fence and have no cabinet. The tuning of a Contractor saw can prove to be very difficult if they are moved from one place to another, thrown into a truck and then taken to a construction site. Contractor saws also prove very convenient if you have less area in your wood shop as they do not take up much space.

The features of cabinet saw and the contractor saw both can be found in Hybrid saws as implied by the name. The same power motor is featured in Hybrid saws as contractor saws. A partial cabinet with the motor contained is also featured in hybrid saws which function to collect dust and aids in noise dampening. These type of saws are reliable and also are lightweight and small enough to be moved around the shop, plus they can also be tuned to achieve max accuracy.

The division of saw blades is basically done depending on their diameter, arbor size, number of teeth, kerf size, speed, application, also the materials used in their construction is also considered while making this division. Usually, the majority of table saws have either 10″ or 12″ blades whereas blades as small as 5″, and as large as one foot are also featured in a number of models too.

Another important part of any table saw is its Fence. The fence of a table saw is the feature that makes it better than the other types of saws. The T-square fence is the most usually seen type of fence in table saws, it has a strong design and good accuracy.

Safety features are obviously a must to have on a table saw. When you’ll be working with your hands some mere inches of distance from a razor-sharp blade spinning at several thousand RPM you will obviously need to have some safety precautions. The kickback should also be kept in mind which happens when wood binds between the back of the blade and the fence, or table. 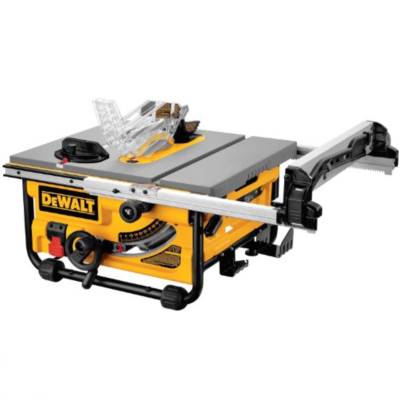